The Three Stooges had 18 of their Columbia shorts released in September. We are featuring six that feature Shemp since it is Shemptember! Of course, Larry & Moe were in these shorts with Shemp along with several key supporting players.

By The By…We’re doing 6 of the 18. If we were an MLB player our batting average would be .333 which is all-star calib -Just like The Three Stooges!

Short Take: Among the many funny scenes are Shemp tied up in the piano wires, Moe & Shemp twined in the phone booth, the brawl among the ladies that want to marry Shemp and what became one of the all-time classic bits: Shemp being pummeled by Christine McIntyre.

Cast: This is one of the ‘Shempless Shemp Shorts’ so we have Larry, Moe and Joe Palma as Shemp. The credited supporting players are Christine McIntyre, Emile Sitka, and Philip Van Zandt and the uncredited cast includes Gene Roth, Evelyn Lovequist, Harold Brauer and through stock footage, Vernon Dent and Jacques Mahoney. Jules White produced and directed Felix Adler’s screenplay from a story by Elwood Ullman, another trio on the production side that collaborated on several shorts.

Short Take: The story in Hot Stuff is a Cold War satire like 1949’s Fuelin’ Around with The Boys as secret agents trying to protect a scientist (Emil Sitka) and his new rocket fuel from falling into the hands of the leader of Anemia, who wants to dominate Urania. The carpet dialog referenced come about as that’s their cover – carpet layers. 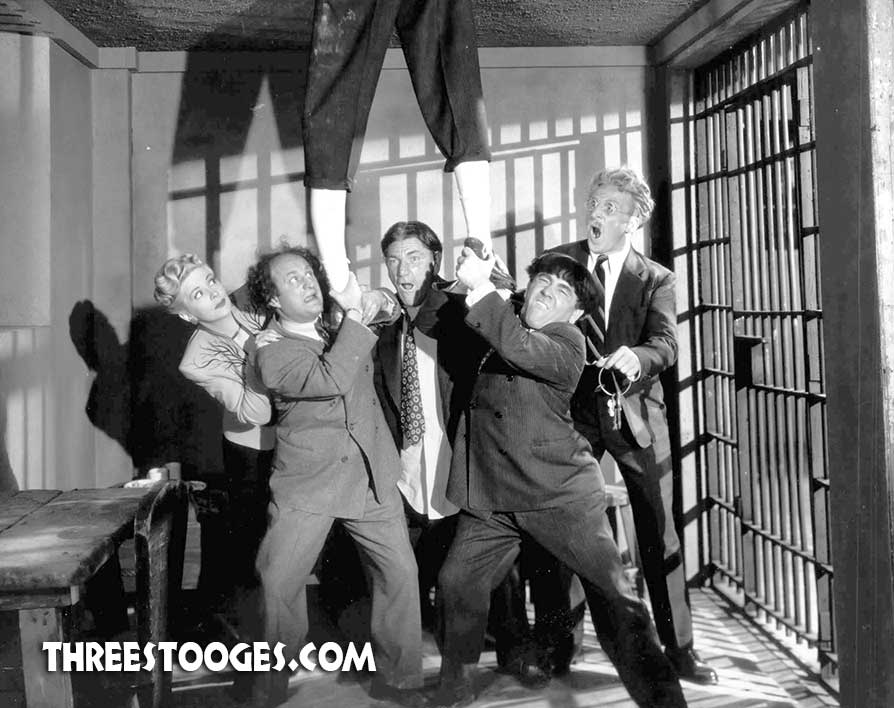 Cast: While this short has a few pieces of dialog right out of Shakespeare, the aural high note is the serenade song in the short – ‘Jane’ – as it was written by Larry, Moe & Shemp.

Nanette Bordeaux, Christine McIntyre and Emil Sitka were the credited cast, along with The Boys of course, while the uncredited cast included Mildred Olsen, Judy Malcolm, Ned Glass and Blackie Whiteford.

Jules White produced and directed from a Clyde Bruckman story.

Short Take: While the plot revolves around the formula of The Boys portraying actors trying to break into show biz who encounter showgirls and do get a break into the big time, White and Bruckman crafted a sort that has each of the supporting characters advancing the comic narrative.

“Hey, what does that apprehensive mean?” “It means you’re scared — with a college education.”

Cast: Don Harvey, Marion Martin and Paul Campbell were credited along with Larry, Moe and Shemp and the uncredited cast included Emil Sitka, Al Thompson, Blackie Whiteford and Victor Travers. The production group was a bit different as this was produced by Hugh McCollum with Edward Bernds directing and writing.

Short Take: The Boys are mistaken for lawmen in this short. They’re actually wanted – for vagrancy. This short has several classic Stooge elements: Mistaken identity; The Boys having to go up against a gang of outlaws to protect the mine payroll; a haunted residence and a big multi room chase scene. At the climax, it is Shemp that saves the day.

Malice In The Palace Released September 1, 1949.

Cast: The rest of the cast included Johnny Kascier as the  Emir of Schmow and Joe Palma as a palace guard. Jules White produced and directed from a Story and Screenplay by Felix Adler. Dent is credited as are George Lucas and Frank Lackteen, also bad guy characters Ghinna Rumma and Half Adollar.

Short Take: The opening scenes in the restaurant are wonderful Stooges antics with the cat and dog and the chaos that ensues around the food cooked by Larry with The Boys ending up on the floor with cat and dog that results in a classic group of Stooge slapstick.

The plot is to get back the Rootin-Tooton Diamond taken by the Emir.The climax takes place in the Emir’s palace with Larry, Moe and Shemp prevailing over the palace guards and the evil Emir. Of course, The Boys disguised as Santa Claus is a visual classic.

Cast: Larry, Moe and Shemp starred and the cast that included Matt McHugh as Claude A. Quacker, Aly Lockwood, Dorie Rivier and Wanda Perry. The story from the production side is another of the many among Jules White, Felix Adler and Clyde Bruckman.

Short Take: The basic story line is Larry and Moe are going to take Shemp on a vacation as a cure for his nerves on the recommendation of Quacker. This short is an enhanced box comedy with most of the action taking place around the car The Boys – and their wives – are packing up for the trip.

Of course, they never quite make it with most of the mayhem centered around the car including Moe’s foot caught under the car while Larry and the baggage all fall from the car creating some mayhem and a mess; which actually leads to curing Shemp! 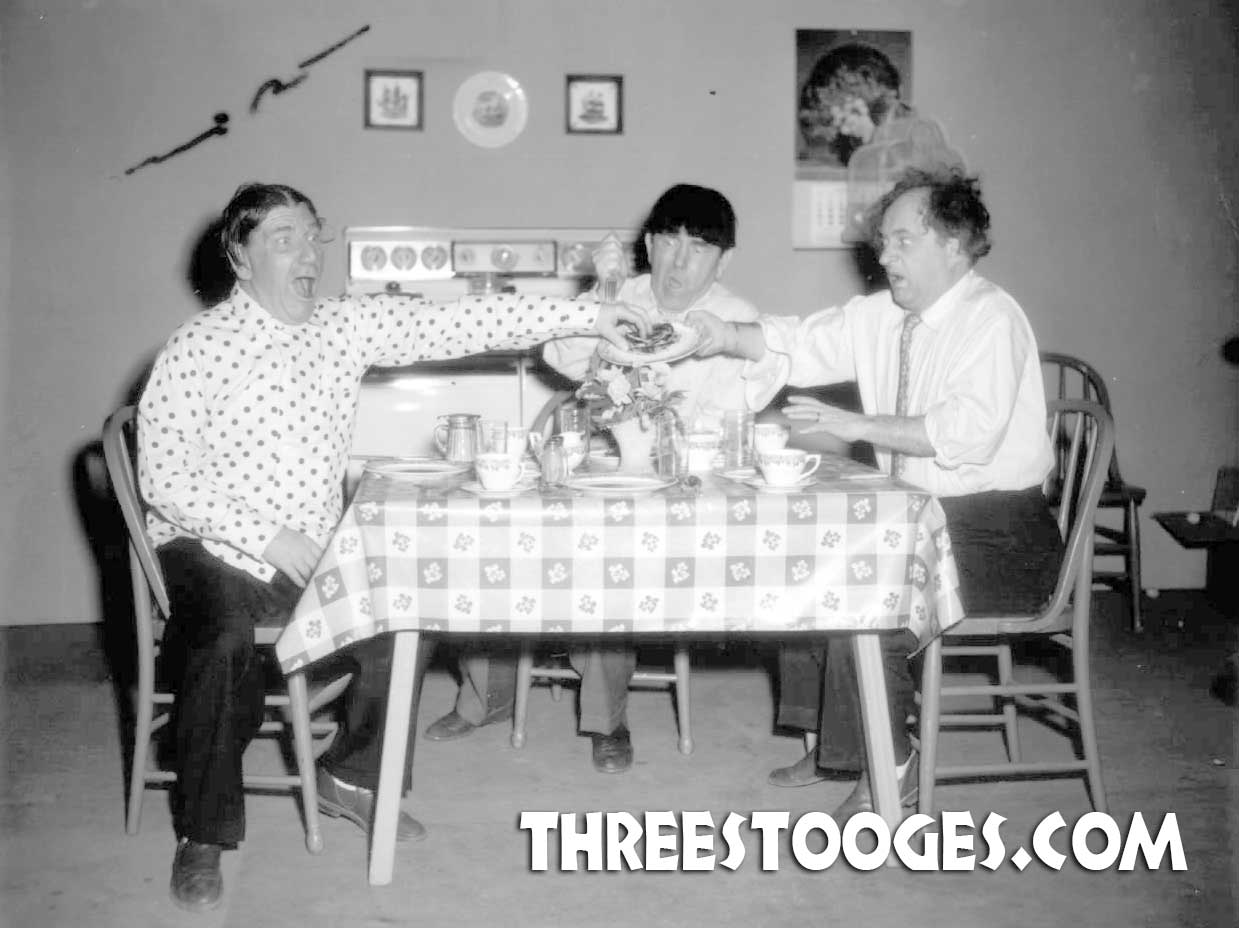 So, we’ll end on that note. Enjoy Shemptember!

DIY With The Three Stooges