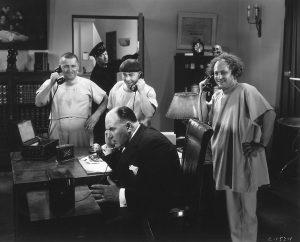 One of the most recognizable pieces of dialog in the entire Three Stooges body of work is ‘Calling Dr. Howard, Dr. Fine, Dr, Howard!’ from the short Men In Black; which was released September 28th, in 1934.

The short was nominated for an Academy Award, the first of many awards and recognition that would come their way for their work. Maybe they’re smiling in the picture because they just got word of their nomination! Nuyk! Nyuk! Nyuk!

Speaking of Nyuk! Nyuk! Nyuk!, we get the first from Curly in this short. He also lets out a string of over 40 Woob! Woob! Woobs! at the end of the film as they ride the gurney. Of course the most famous dialog from the short is the hospital speaker all through the short blaring ‘Calling Dr. Howard! Dr. Fine! Dr. Howard!’ Then there is The Boys’ ‘oath’ that would become a Three Stooges iconic saying: ‘For Duty and Humanity!’ 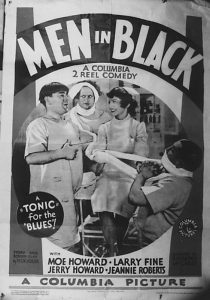 The movie posters listed the cast as Moe Howard, Larry Fine and Jerry Howard, along with Jeannie Roberts. She was the ‘hiccupping’ nurse. The film credit screen, however, reads Moe, Larry & Curley. This was Jeannie’s first film. She made a dozen more films and retired in 1937. 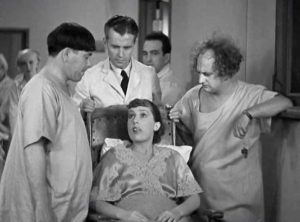 Phyllis Crane played the iconic character Anna Conda in this short. Her work with The Three Stooges was limited – only a total of seven shorts – but they were memorable: She was Molly Gray, alongside Lucille Ball, in Three Little Pigskins; she was in Pop Goes The Easel, the only short with Moe’s daughter Joan and Larry’s daughter Phyllis (as the two little girls playing hopscotch; Uncivil Warriors, one of The Boys great period pieces; Hoi Polloi, perhaps their quintessential short poking fun at the rich; Ants In The Pantry with one of the craziest dance scenes in all of the shorts and she was the girl kissed by Curly in A Pain In The Pullman.

By The By…The Los Arms Hospital in Men In Black was actually the Cedars of Lebanon Hospital in Los Angeles where Moe’s daughter Joan gave birth to Moe’s grandchildren.