The Boys are always prepared for any emergency with a healthy dose of laughter. But we can always use the caring touch and comedic timing of a good nurse. In honor of #EmergencyNursesDay and #EmergencyNursesWeek, we celebrate the many nurses of The Three Stooges shorts.

Blanche Payson appeared in nearly 160 films between 1916 and 1946. At 6 foot 2 inches, she towered over both men and women co-stars in the many slapstick comedies in which she appeared, as a foil for such comedians as The Three Stooges, Laurel and Hardy and similar popular acts of the time. She often played brutal and dominant women, such as Oliver Hardy’s wife in Helpmates (1932) or Bobby Hutchins’ stepmother in the Our Gang comedy Dogs Is Dogs (1931). She was born in Santa Barbara, CA and died in Hollywood in 1981. Blanche also appeared in Pop Goes The Easel, Hoi Polloi, A Pain In The Pullman, Slippery Silks, Dizzy Doctors, CooKoo Cavaliers, and An Ache in Every Stake.

Poppy Wilde appeared in over 40 films including The Three Stooges shorts Hoi Polloi and All The World’s A Stooge.

Marjorie Kane appeared in several other Stooge shorts including How High is Up, No Census, No Feeling, CooKoo Cavaliers and Three Smart Saps. She appeared in 68 films between 1929 and 1951, occasionally under the name Babe Kane. 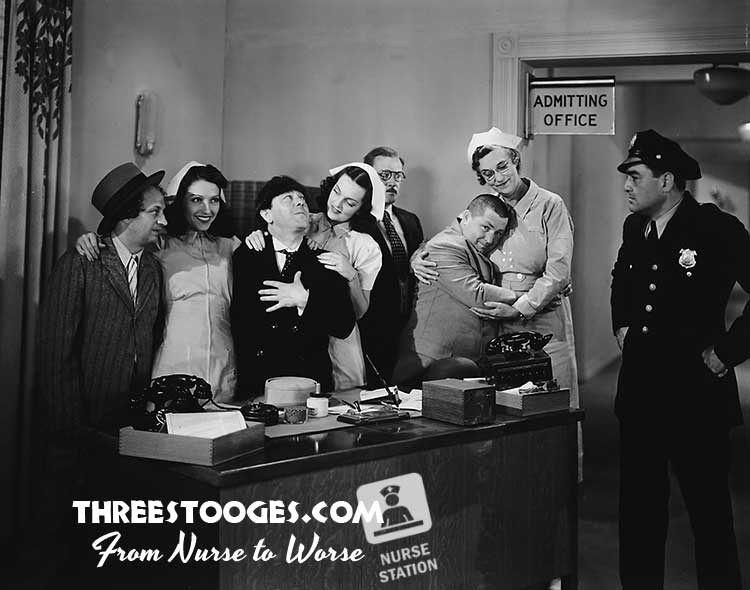 Who could forget Jeanie Roberts as the hiccuping nurse in Men In Black? This was Ms. Roberts only appearance in a Stooge short, but it was a memorable one. She appeared in approximately a dozen other films most as uncredited. In December 1936, she married Henry Moeller, Jr., a mortician. She drove from Santa Monica to San Bernardino in an undertaker’s ambulance to wed Henry. Roberts was last married to W. Gordon Garnett, a successful surgeon, sometime around 1960. As Gini Roberts Garnett, she died April 12, 1971, at St. Vincent’s Hospital in Los Angeles. She is inturned at Forest Lawn Memorial Park in Glendale, CA. 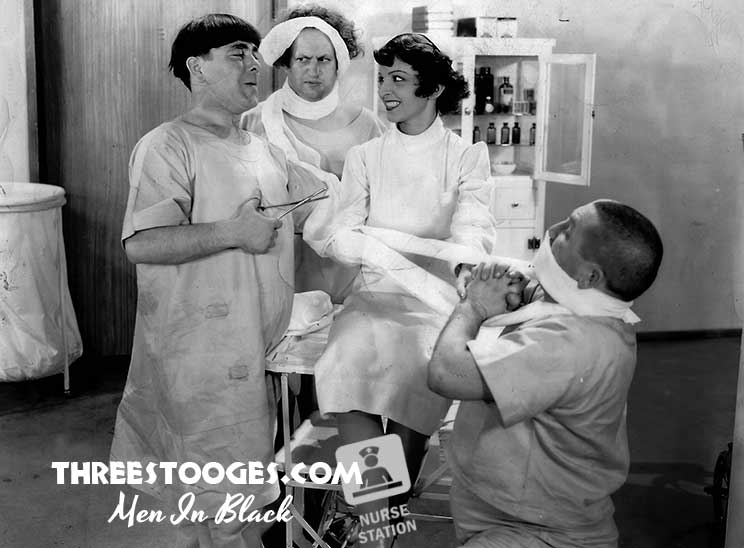 The Three Stooges Men In Black with Jeanie Roberts

Gertrude Messenger also appeared in Whoops, I’m An Indian and Slippery Silks. She starred in a total of 52 films in her career, 11 of which were westerns, for which she was best known. 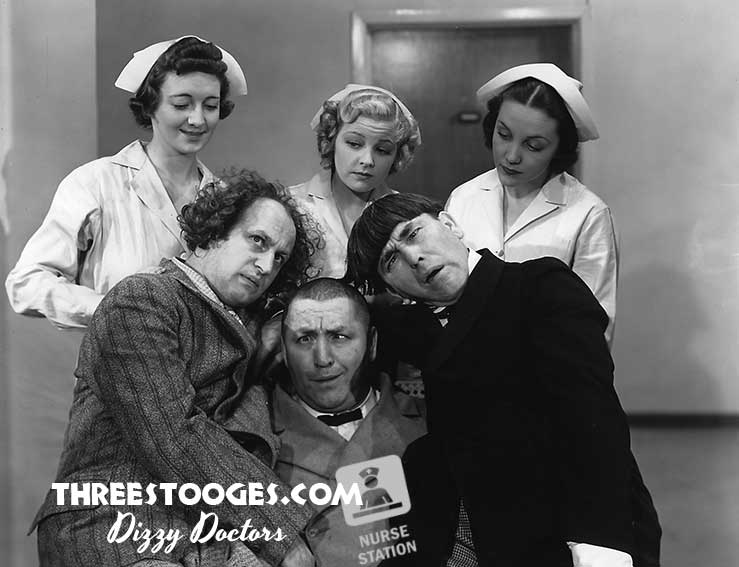 The Three Stooges Dizzy Doctors with Elaine Waters, Gertrude Messenger, and we believe to be Ella McKenzie.

Dorothy Moore was also in Oily To Bed, Oily to Rise.

Ethelreda Leopold Started in film as a Busby Berkely dancing girl at Warner Brothers. Worked up to the early 1990s, even appearing on an episode of Married With Children. She was in a number of Shemp solo shorts and with The Boys in Half-Shot Shooters, A Pain in The Pullman, Back To The woods, Goofs and Saddles, Wee Wee Monsieur, Nutty But Nice, All The Worlds’ A Stooge, Time Out for Rhythm, In The Sweet Pie and Pie, G.I. Wanna Go Home and Pest Man Wins.

Beatrice Blinn has an impressive resume appearing in many popular films during her career from 1916 to 1944. she is known for Golden Boy (1939), Nothing But Pleasure (1940) and Art Trouble with Shemp (1934). She was married to Crane Wilbur. She died on March 31, 1979 in Oceanside, CA. She appeared in a number of Three Stooges shorts: False Alarms, Whoops, I’m An Indian, Slippery Silks, Termites of 1938, Violent Is the Word For Curly, Calling All Curs, and Three Sappy People.

Beatrice Curtis was also seen in False Alarms, Three Sappy People, Slippery Slicks, and the adorable bespectacled colonial ingenue in Back To The Woods. 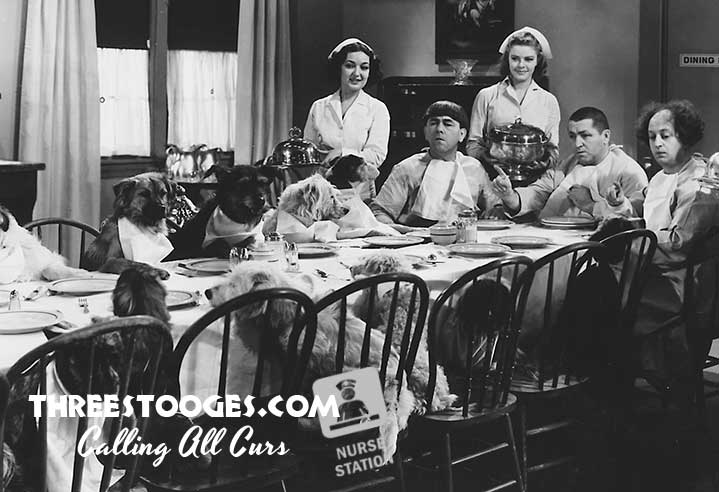 “Somebody give me a pie!” Mary Ainslee who spoke that famous line from In The Sweet Pie and Pie, was also featured in I’ll Never Heil Again, Hokus Pokus, Pet Man Wins, He Cooked His Goose, and Flagpole Jitters. She may have been the only one of our nurses to appear in a Stooge short with Joe Besser; Triple Crossed. In the mid-1980s, she suffered a stroke and never fully recovered. She died on November 1, 1991. 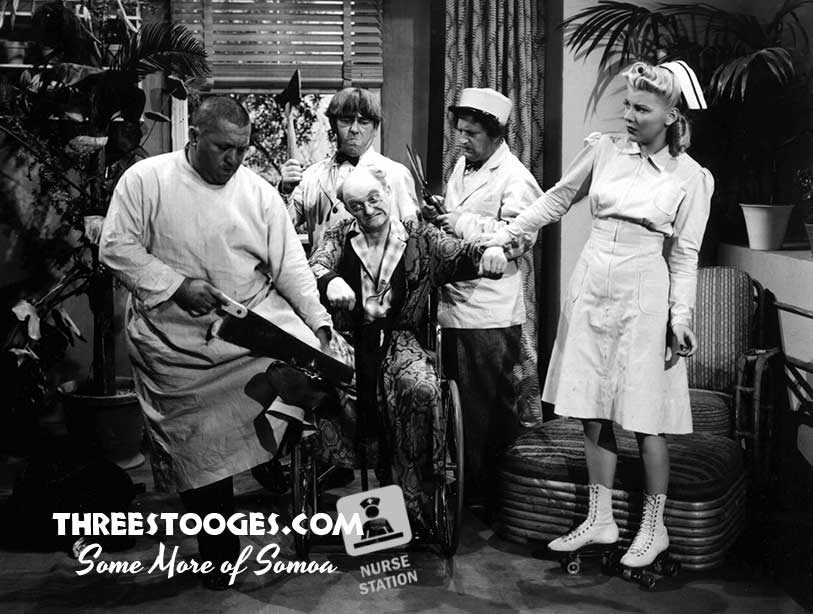 The Three Stooges Some More of Somoa with Mary Ainslee

Evelyn Young was the only nurse in this Stooge escapade. She was also unforgettable as the beautiful woman in a turban in the doctor’s waiting room who is the object of Curly’s affection as he acts like a dog in From Nurse To Worse. She also appeared in Boobs In Arms and No Census No Feeling. 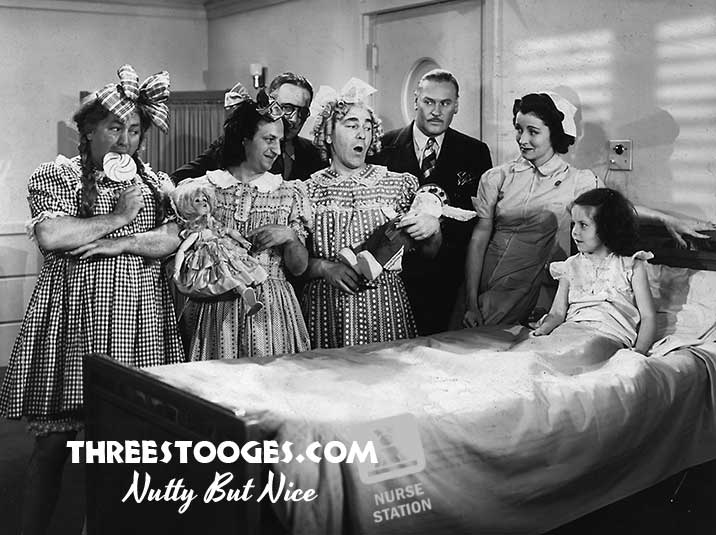 The Three Stooges in Nutty But Nice with Evelyn Young.

Enter Nurse Shapely. Jean Willes was a knock-out. Gorgeous and in her only short with Curly she belted him a good one. Willes appeared in solo films with Shemp and Curly Joe DeRita as well as The Stooges’ A Snitch In Time, Don’t Throw That Knife, Gypped In The Penthouse, and Hula-La-La. Willes appeared in approximately 65 films in her 38-year career. She was a favorite of director Edward Bernds. She made the transition to television easily appearing in dozens of series in varied roles and genre including Perry Mason, The Beverly Hillbillies, McHale’s Navy and Kojak. Willes portrayed Belle Starr opposite James Garner in a 1959 episode of the ABC/Warner Brothers western series Maverick entitled “Full House,” in which Joel Grey played Billy the Kid.

Thanks to all the nurses out there! We don’t know what we would do without them.

Where To Buy Wise Guy Root Beer from Rocket Fizz!

DIY With The Three Stooges